Rock and Roll Hall of Fame and Museum to screen Sweet Blues: A Film About Mike Bloomfield and Feed Your Head: The Psychedelic Erar

Posted on January 12, 2015 by NorthernOhioTourism.com 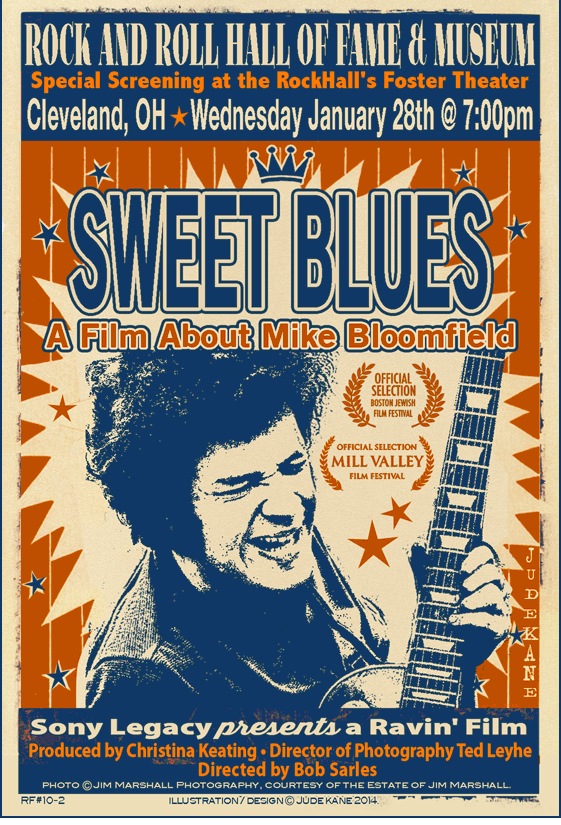 CLEVELAND (Jan. 7, 2015) –The Rock and Roll Hall of Fame and Museum will host two film screenings on Wednesday, January 28, 2015, beginning at 7 p.m.  Sweet Blues: A Film About Mike Bloomfield (58 minutes) and Feed Your Head: The Psychedelic Era (22 minutes) will be shown in the Museum’s Foster Theater. Following the screenings, Bob Sarles, director of both films, will discuss Mike Bloomfield’s legacy, as well as the creative revolution of the 1960s.  Bloomfield will be posthumously inducted into the Rock and Roll Hall of Fame in the class of 2015 as a member of the Paul Butterfield Blues Band.

About Sweet Blues: A Film About Mike Bloomfield:

“You know, I like sweet blues… I want to be singing. I want to be sweet,” said music legend Mike Bloomfield of his searing, lyrical guitar playing. His awesome instrumental prowess is on full display in this raucous documentary celebrating the legacy of a hard-living, finger-fretting renegade. Described by fellow icon Al Kooper as “not just another white boy [but] someone who truly knew what the blues were about,” Bloomfield drew on African American tradition while burnishing his licks with a radical compositional approach reflecting the social and cultural upheaval of the 1960s. Bloomfield passed away in 1981, but his sterling musicality as the embodiment of Chicago blues lives on through the work of acolytes such as Carlos Santana, B.B. King and Charlie Musselwhite, all of whom testify to the master’s enduring influence in Bob Sarles’ lovingly crafted film. Sweet, indeed. (Steven Jenkins)

About Feed Your Head: The Psychedelic Era:

From Kesey’s early “Acid Tests,” to the San Francisco’s Fillmore and Avalon ballrooms, Monterey, LA’s Sunset Strip, and London’s UFO club, culminating with the Woodstock Festival, the birth and evolution of psychedelic music is explored in this documentary film. The film incorporates interviews with the musicians and promoters who shaped the scene with rare and classic performance clips. Produced for exhibit at the Rock and Roll Hall of Fame in Cleveland, this film was part of the Rock Hall’s “I Want To Take You Higher” exhibit in 1997.

Bob Sarles directed films that are displayed at the Rock and Roll Hall of Fame in Cleveland, the EMP Museum in Seattle, and the Stax Museum of American Soul Music in Memphis. Sarles was a producer and editor on VH1’s Behind The Music television series, and directed and edited DVDs about Jefferson Airplane, and John Lee Hooker.  He produced the triple platinum selling, nine-DVD box set, Rock and Roll Hall of Fame Live! for Time Life, edited the music documentary series Unsung for TVOne and produced and co-directed the concert film Phil Lesh & Friends Live at the Warfield. Since 1995 Bob Sarles has produced and edited artist tribute films for the annual Rock and Roll Hall of Fame Induction Ceremony.  Sarles divides his time between his home in San Francisco and Los Angeles, where he has a busy career editing documentaries and unscripted television series and running his own production company, Ravin’ Films, Inc., with his partner and wife Christina Keating. They are currently in production on a documentary about American satirist Paul Krassner.

About the Rock and Roll Hall of Fame and Museum:

The Rock and Roll Hall of Fame and Museum’s mission is to engage, teach and inspire through the power of rock and roll. The institution carries out its mission by giving voice to the stories of the people, artifacts and events that shaped rock and roll — through Museum exhibits, materials in the Museum’s Library and Archives, traveling exhibitions, and a wide array of innovative educational programs and activities. The 150,000 square-foot Rock and Roll Hall of Fame and Museum, located in Cleveland’s rapidly developing North Coast Harbor, is home to major artifact collections, four state-of-the-art theaters, and year-round educational and concert programming.

The Museum is open seven days a week from 10 a.m. to 5:30 p.m. On Wednesdays (and Saturdays through Labor Day), the Museum is open until 9 p.m. Museum admission is $22 for adults, $18 for adult residents of Greater Cleveland, $17 for seniors (65+), $13 for youth (9-12), children under 8 are free. A 6% Admission Tax that goes to support Cleveland Metropolitan Schools is added to each ticket at purchase. Museum Members are always admitted free, for information or to join the membership program call 216.515.8425. For general inquiries, please call 216.781.ROCK (7625) or visithttp://www.rockhall.com.  The Ohio Arts Council supports the Rock and Roll Hall of Fame with state tax dollars to encourage economic growth, educational excellence and cultural enrichment for all Ohioans. The Museum is also generously funded by Cuyahoga County residents through Cuyahoga Arts and Culture.

We are Ohio's website for events, attractions, accommodations, restaurants, camping, local businesses, farmers' markets, antique and craft fairs, Ohio festivals, ghostly things and so much more
View all posts by NorthernOhioTourism.com →
This entry was posted in Uncategorized and tagged Rock and Roll Hall of Fame, things to do in Ohio. Bookmark the permalink.
Loading Comments...
%d bloggers like this: